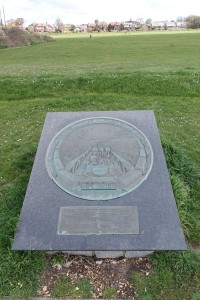 Designed by the Gosport Society and funded by the Society with Gosport Borough Council and Hampshire County Council, the D Day memorial to commemorate the 60th Anniversary of the building of the Phoenix caissons at Stokes Bay can be seen on the promenade close to the Stokes Bay Sailing Club compound. It was placed at this spot because fourteen of the Phoenix B2  units were constructed close by. In dry weather, if you look beyond the memorial you may be able to see, showing through the grass, the marks of the rolling ways used to move one of the huge caissons onto the launching way before dragging it, partly constructed, into the sea. The launching slipway was close to this location.

The design is taken from a drawing by Wendy Osborne: 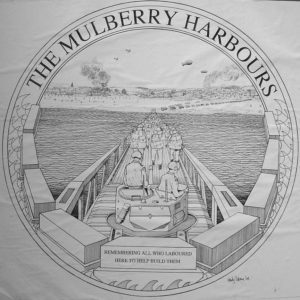 The memorial reads:
This plaque commemorates the 60th Anniversary of the building along
this shore of 14 concrete pierheads from October 1943 to April 194.
These formed part of the walls and floating piers of the Mulberry
Harbours which were a major contribution of the success of
Operation Overlord and the ending of the Second World War in Europe. 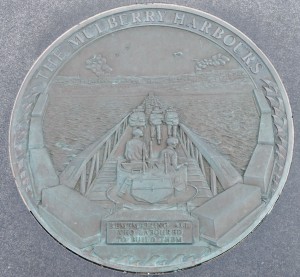 147 Phoenixes of six different types in total were ordered. Fourteen of the smaller B2 types were constructed in two separate sites at Stokes Bay. The memorial stands at the east Phoenix construction site.

For a detailed description of the units and their construction visit:
Phoenix Units at Stokes Bay