One of the objectives of the Friends of Stokes Bay is :

To provide practical assistance, advice and support to Gosport Borough Council and their contractors in maintaining a clean and safe environment in the area, while remaining an apolitical and independent society.

In order to do this we undertake practical work along the Bay.

A massive thank you to all our loyal litter picking helpers who come along and give their support with our litter clean-ups throughout the year.

Sadly, the latest report from the Marine Conservation Society  identifies that our seas are becoming more polluted and the main culprit is plastic.  Litter has increased by 135% since 1994, with plastics increasing by a staggering 180%. Plastic has been found in the stomachs of almost all marine species including fish, birds, whales, dolphins, seals and turtles.

Litter recorded on beaches has risen by 10% in a year.

The clean-ups and surveys of almost 340 beaches around the UK also show ‘on the go’ litter items from our eating out and about lifestyle made up 20% of all the rubbish found. The MCS is calling on UK governments to put a levy on disposables.

Saturday 25 June 2022, meeting at the Splash Park: 10:00 am.
Visit our noticeboard
for details of our next litter pick.
We also post details on our FaceBook page.

We hope you will come and join us and that the weather will be kind to us.  We will of course adhere to any government guidelines applicable at that time.

April 2022
We were happy to participate in the annual British Spring Clean on Saturday 2nd April.

January 2022
Our first 2022 beach and litter clean-up was held on  Saturday 29th January at 10.00am
Huge thanks to our members and supporters who joined us for our Stokes Bay litter pick, which resulted in 58kgs of rubbish removed from the area!
On the downside, sadly several of our volunteers reported an increase of dog mess both on the beach and the grass areas.

October 2021
We have designed a limited number of Friends of Stokes Bay t-shirts which are on sale for £14 each.

May 2021
A big thank you to all our litter volunteers who helped amass 90+kilos of rubbish from in and around the Bay on Saturday morning! It was the most beautiful of days and a joy to see so many happy, smiling people appreciating this beautiful area.

The one downside, revellers from the night before, were as usual, not considerate and had left large amounts of dangerous broken glass and rubbish around the shelters and the BBQ area. The Council Operative was on the scene before us and had started clearing up, but we still managed to collect a large number of bottles, and the GBC cleansing team were needed to deal with the fine shards of glass in the grass.
We are most grateful to our Womble friends, who were out in force, cleaning along the area from Gafirs to Gilkicker, it is very much appreciated.

September 2020
Thank you to all our wonderful and dedicated volunteers who between them managed a staggering collection of 68kilos of rubbish. On a happy note though, the overall opinion was that the area was in better shape and much cleaner than a few short weeks ago, so let’s keep the momentum up and aim to keep our beautiful Stokes Bay a wonderful and safe environment for all to enjoy!

June 2019
Thanks to all those who helped with this litter pick despite the low temperature and strong winds. We are happy to report that the amount of litter collected was small compared with previous picks. This must be down to the fact that the public are dropping less and the hard work of GBC employees who regularly tidy up along the Bay.

March 2019
We had the first beach and litter clearance of the season on 23rd March and this was in conjunction with the Keep Britain Tidy Great British Spring Clean campaign and what a success!  We were delighted that over 160 volunteers turned up including the Gosport Wombles, children from the local junior schools, Brownies & scout packs, local families and FOSB members.  The weather was perfect and we collected approximately 65 bags of rubbish.  Our sincere thanks to everyone for helping to keep our Jewel in the Crown a beautiful clean area to enjoy. 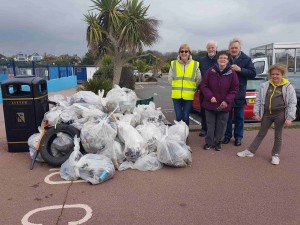 September 2018
We took part in the Great Solent Beach Clean in conjunction with The News.
Here are the 6th Gosport cub scouts, who helped with the litter pick.

March 2018
An excellent turnout with over 100 people and children coming to help keep Stokes Bay tidy. Everywhere you looked people with blue bags picking up litter could be seen. The weather was kind to us with a warm, Spring day. Thanks to all who helped.

June 24 2017
Despite the sizzling temperatures throughout the week, who’d have guessed that we then had to cancel our litter pick on Saturday 24th June.  Although half a dozen of us did brave the elements, the strong winds and heavy rain beat us in the end!

March 4 2017
What a spectacular turnout we had for this litter pack. Over fifty adults with more than thirty children (thanks to parents from Gomer Junior School) helped to scour Stokes Bay for  litter. So many volunteers that litter was scarce. There seems to have been a great reduction in the number of carrier bags, bottles and cans. A significant improvement on previous years.

Another sucessful litter pick with the weather much kinder this time. Thanks to all who turned up and helped.

Well done to all those who turned out for the litter pick despite the forecast heavy rain. Twelve sacks of litter were collected.

Our first litter pick for 2016 saw a wonderful turn out for our ‘Clean for the Queen’ event on 5th March.
This was an initiative by the Keep Britain Tidy campaign and we were joined by members of Alverstoke Women’s Institute, staff from Hampshire County Council, Gosport Street Pastors, County Councillor Chris Carter and local families.

We organise 4 clearances a year along the Bay – covering the beach and green areas stretching from Bayside cafe to the Gilkicker lagoons.

The Friends have taken on the responsibility for maintaining the paintwork of the two shelters along the promenade at Stokes Bay. Members’ help with this is always welcome. Contact the society if you feel you are able to assist.

The friends have agreed to maintain the two flower beds in front of the Pebble Beach  cafe close to the Sailing Club. Any members who have time to spare and have a talent for nurturing plants will be welcomed with open arms. This is not an easy environment for cultivating seaside plants but the Friends are determined to make a difference so that visitors can enjoy the flowers.
June 2020 Update: The flower beds continue to flourish, although several of the plants supplied last year by GBC unfortunately did not survive the winter and have withered and died.  Our two committed flower team members, Malcolm and Pat Seymour have suggested some appropriate plants which the committee has allocated a budget for them to be purchased.  We offer our sincere thanks to Pat and Malcolm for their support and hard work in keeping the beds looking good.  We had hoped that this year we would enter the Gosport in Bloom, however COVID-19 put a stop to that, but we are ever hopeful for next year!

The Friends usually have a stall at the Alverstoke Michaelmas fair held in September of each year in the streets surrounding Alverstoke Village and church.  The Friends’ stall helps to promote the Friends and our activities. We usually have a selection of our publications on display and for sale. Anyone who can spare some time to assist on the stall will be welcomed. Contact the secretary for more details.

Our 46th AGM was held using Zoom. We hope that our AGM in 2022 will be held as normal.
The Parish Centre is booked for Thursday 23rd June at 7pm. More information will follow in our next newsletter edition.

Our yearly reports have been sent  to all members by e-Mail. However if you wish to receive an Excel Statement of Accounts, email the secretary or the treasurer.

The nominations and election of officers and committee will carry over until next year’s AGM.