Travel along the beach westwards from Stokes Bay towards Lee on the Solent and you will soon come to Browndown Battery. Go on past this Victorian Coast Defence battery and you will find a concrete structure, ten to fifteen feet high sticking up through the shingle. It has a circular, dome shaped top with metal meshes around its underside like gills. There is no door or hatch into it for access. Pebbles dropped down into it fall a distance and land with a plonk. This is the enigmatic ‘Browndown Mushroom’. Why is it there? Who built it? It is on a military Range so does it have a military purpose?

Myths abound amongst local Gosport people. All kinds of speculation has been spread.
Is it a vent for a secret military bunker beneath the nearby fort? Or a vent for a tunnel running to a hidden Military facility?
It is a long way from any surface structure apart from the nearby Victorian Browndown Battery. I can safely report that there are no hidden doorways or passages leading from beneath that Victorian structure.

Here is one entry from a discussion group concerning it:
…the ‘Browndown Mushroom’, is a perfect example. A brutal concrete fabrication, some twenty-five feet tall, it stands isolated on the extensive shingle beach that is Browndown Military Training Area. Perhaps some kind of vent, the mushroom’s gills are of steel mesh – and it is definitely not a platform. Its original purpose a total mystery, this entity has the power to perplex, impress and amuse all at once. Whilst delighting in such things, one can be absolutely satisfied that corpulent military spending should never be challenged.

If you know what it is you would certainly not want to climb down into it! The simple truth is that it was constructed to provide air release for a storm water overflow system for the Peel Common treatment works further inland. The relief pipe runs beneath the beach and exits beneath the sea to the south, marked by a post and triangle, if you care to look through binoculars.

Laing Civil Engineering were contracted to construct the Browndown Outfall for the Southern Water Authority, as part of the South Hampshire Main Drainage Scheme for the treatment and disposal of sewage. Browndown Outfall is a 1km long underwater culvert which transports treated sewage from Peel Common Sewage Works, another contract carried out by Laing. The outfall was built in sections which were linked together in a chain on the seabed. The landward section of the outfall was cast in-situ in a temporary cofferdam.

Southern Water explains the need for the storm water outlet: Under heavy storm conditions, rainfall can enter the sewerage systems and significantly increase the flow in the system. The flow of water arriving at the WTWs can exceed the recycling capacity of the works, so any excess water is temporarily stored in large storm tanks. If these tanks ever fill to capacity, then they would discharge water into the sea through storm overflows.

The sections of pipe were constructed on the shore at Browndown and were piled up here ready to be laid. Luckily someone took a photo of them. 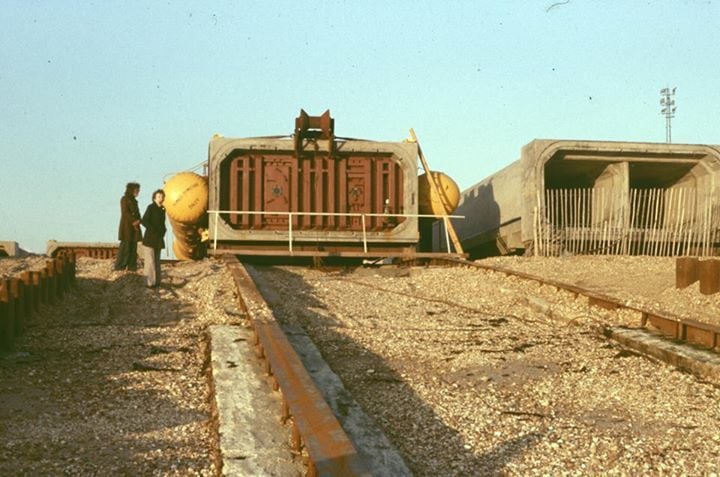 Here is an elevated view of the precasting yard for the outfall of the Peel Common Sewage Works at Browndown, showing concrete units for the underwater section.

Another photograph showing the sections of pipe.

Mystery solved but I doubt that the myths will go away. There are still those who would prefer to believe that the strange mushroom has a more hidden, military, purpose.

As one contributor to our Facebook page explained: Peel Common sewer works, come on, let’s get some imagination going here, I think the mushroom is a vent for a secret ww2 bunker that’s been revamped that base used to be massive in its day, if there was ever another global war, pompey would be targeted because its a navy base, how long would it take to enter a tunnel in pompey navy base go under the harbour and enter the bunker under stokes Bay, who knows how big that bunker is and what it’s got in it, food stores for yrs, guns, ammo, and all for the rear admiral and his staff of the southern Fleet, there arnt that many big navy bases anymore because of government cutbacks I think our nearest submarine base is in Scotland, just imagine if what I have said is true and that mushroom is a vent for a massive government bunker, of course they wouldn’t ever admit that it was there, they would rather say it was swamp gas reflecting off a weather balloon brought on by the light of venus….. Just imagine

More problematic is a nearby set of concrete plinths, joined with metal strips and slowly decaying amongst the shingle. This series of concrete platforms may have a military origin but no-one has satisfactorily explained what it was. Soldiers on exercise did not know what they were for, when asked. They were not there when the Hovershow took place nearby in the 1960s. They do appear on the 1981 OS map of the area, but not before. Are they connected, left over, from the sewer construction? If so why were they not removed on completion? Were they put there to support some sort of temporary structure now removed? Who knows? Feel free to speculate.