The Solent Way
Lee on the Solent to Portsmouth section

– view and print off detailed map
The route is waymarked with a Tern on a green arrow and is shown on Ordnance Survey maps Explorer OL22, 119 and 120 at 1:25 000 scale and indicated on these maps with a green diamond and the name of the route (Solent Way).
Starting at Lee on the Solent you can follow the Solent Way along the shore line to Stokes Bay and Gilkicker Point (5.7km/3.5miles).
On the way you will pass Browndown ranges, which is an unusual shingle habitat that has been used for military training for more than 300 years, and is still used as a firing range today.
Browndown Battery (built in 1888) is situated in the army training camp.
Historic features around Stokes Bay include No. 2 Battery  which now houses the Historic Diving Museum and is open to the public during the Summer months.
The Solent Way runs along the length of Stokes Bay from No.2 battery to Fort Gilkicker, passing the sites of the D-Day hards, the D-Day Command centre, which is now the home to the Gosport Sailing Club, and the site of the old Stokes Bay pier and the School of Electric Lighting. At the east end of Stokes Bay you pass Fort Gilkicker, a Victorian Coast Defence Battery built as part of Lord Palmerston’s great defence plan for the united kingdom in 1858, that turned Portsmouth into one of the mostly strongly defended places in the world.
From there you turn north past the the salt lagoon from the foreshore of Gilkicker Point, which is a Site of Special Scientific Interest, a haven  for wildlife.

Lee on the Solent to Portsmouth Route

From 1 January 2012, the Defence Infrastructure Organisation have withdrawn all permissive rights to walk along the foreshore for the Solent Way at Browndown near Gosport.
The new route: Map

The section of the English Coastal Path from Lee on the Solent to Gosport Waterfront passes through Stokes Bay, to Gilkicker Point and then on to Gosport Waterfront via Haslar.
It Includes the Browndown SSSI and the Gilkicker Lagoon SSSI
and passes the No. 1 Battery, Stokes Bay Lines – Scheduled Monument and the Fort Gilkicker – Scheduled Monument.
As a result of the proposals described in this Overview and associated reports for each length of coast, the quality of coastal paths will be improved and there will be greater certainty and clarity about the rights people have within the coastal margin.
A key feature for this area of coastline as a whole is that during the winter months, it supports internationally recognised populations of non-breeding water birds. The extensive areas of soft mud exposed at low tide are the main feeding areas but the birds also need suitable undisturbed places to roost and several species use inland areas that provide supporting habitat for feeding and resting.

GPM1:
Plans for maintenance and improvements to defence structures and beach management and replenishment are in place to provide flood protection to residential areas, commercial property and MoD assets between Lee-on-Solent and Gosport Lifeboat Station, shown on maps GPM 1a to GPM 1d. As such, we have not made any specific proposals to enable the trail to adapt to coastal change on these lengths of coast.The shingle around Fort Gilkicker is identified as vulnerable to erosion up to 2105 in the Shoreline Management Plan. On these lengths of coast we propose to recommend that the trail is able to roll back so that it can be repositioned without further reference to the Secretary of State, once he has approved the initial route. There is more detail about these roll-back arrangements in part 7 of the Overview and in the relevant report. 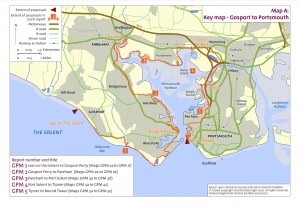 An ‘Overview to Natural England’s compendium of statutory reports to the Secretary of State’ for the Gosport to Portsmouth stretch of coast can be s downloaded and viewed here:
https://assets.publishing.service.gov.uk/government/uploads/system/uploads/attachment_data/file/808559/gosport-portsmouth-overview.PDF

England Coast Path: plan of the Gosport to Portsmouth stretch