A walk across the shingle from GAFIRS towards Fort Gilkicker will reveal a strange concrete pad close to the beach, with a circular earthenware pipe set into it. Who put it there? What was this for? When was it used? Look more closely and you can make out a compacted, shingle path that leads from it, in the direction of Fort Gilkicker.

If you walk around the front of the fort to the east side. Next to the low concrete sea wall you will find two more large rectangular concrete pads. One is raised up on an earth bank higher than the other. There is a fourth one, if you know where to look. This one is completely hidden beneath the shingle bank on the west side at the foot of the fort’s earth bank.

Visitors have often speculated as to their origin and purpose. Two are on the east side of the fort with two on the west side. Whatever their purpose they seem to be associated with the fort because in recent years (the 1970s and 1980s) armoured wires could be found running to them, down the bank of the fort. 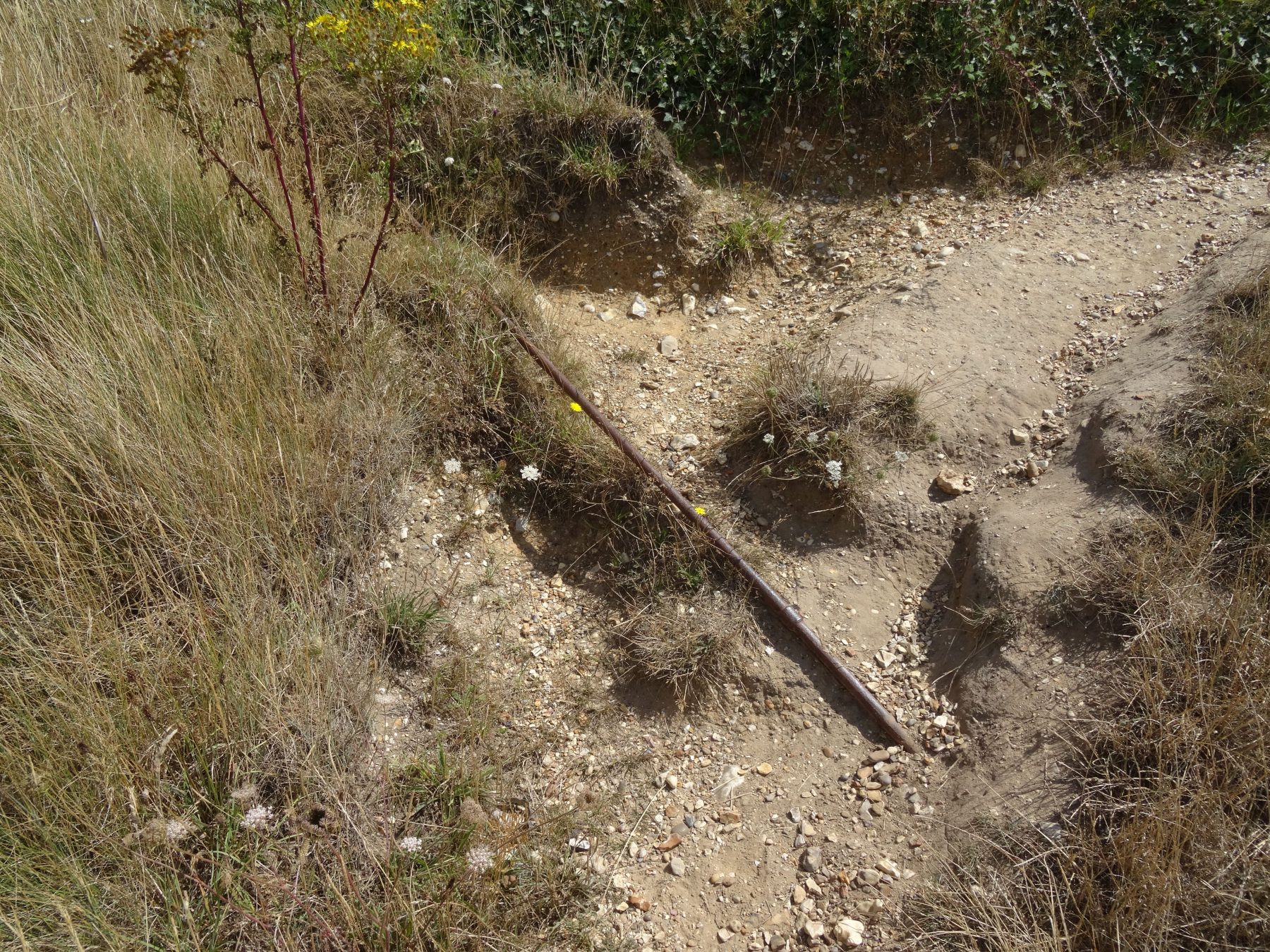 The answer is not at all obvious. They are all that remains of bases for Coast Defence Searchlights.

The date that the four searchlights were installed is puzzling. The generators for them were inside Fort Gilkicker in two of the old gun casemates at the west end. They were ‘Crossley’ generators, identified as such in the 1980s by a cast iron tool rack on a wall which had this name cast into it. Sadly this was wantonly destroyed in very recent years by vandals who smashed it off the wall and ripped out much of the fort’s fittings in a pointless spree of aimless destruction. 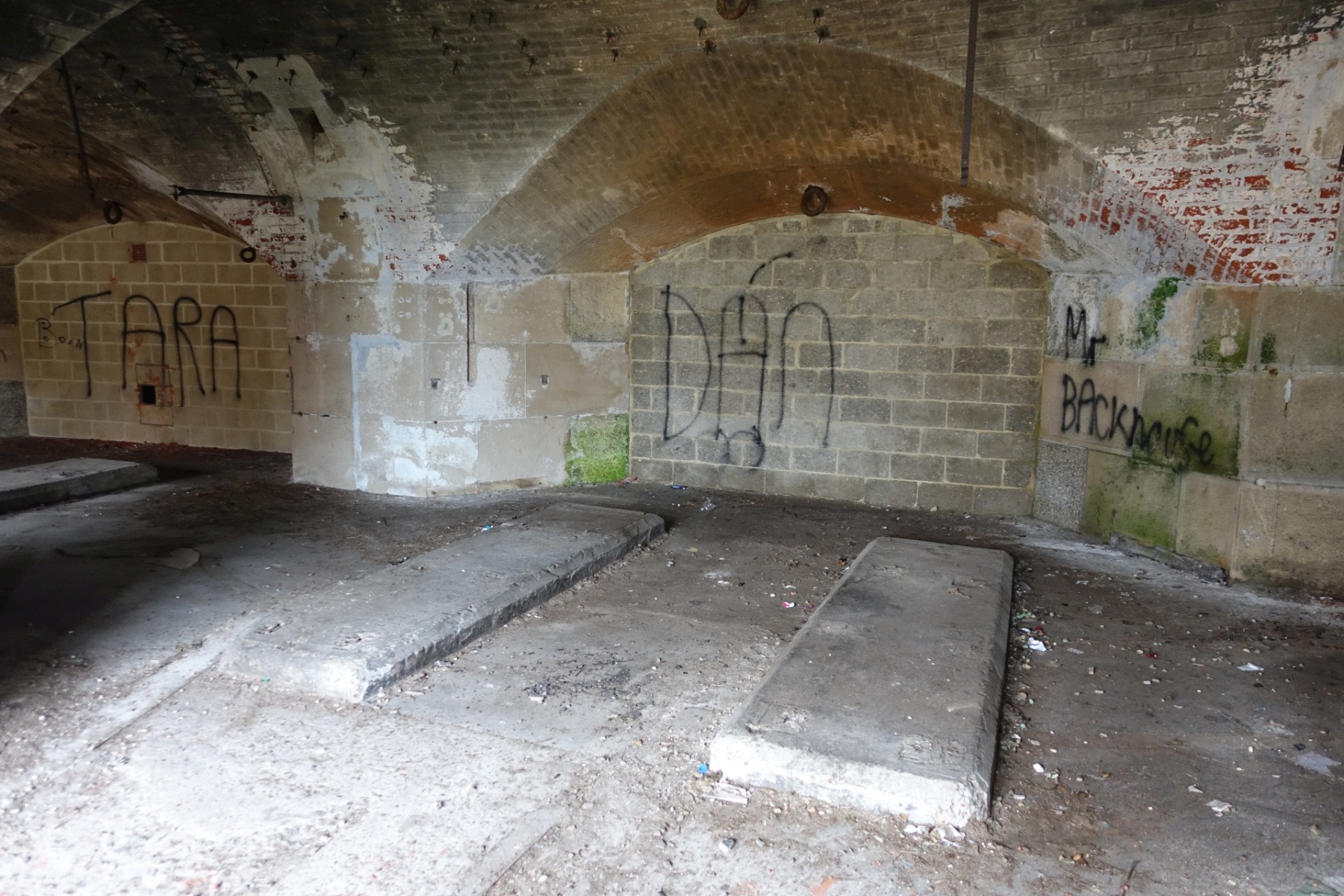 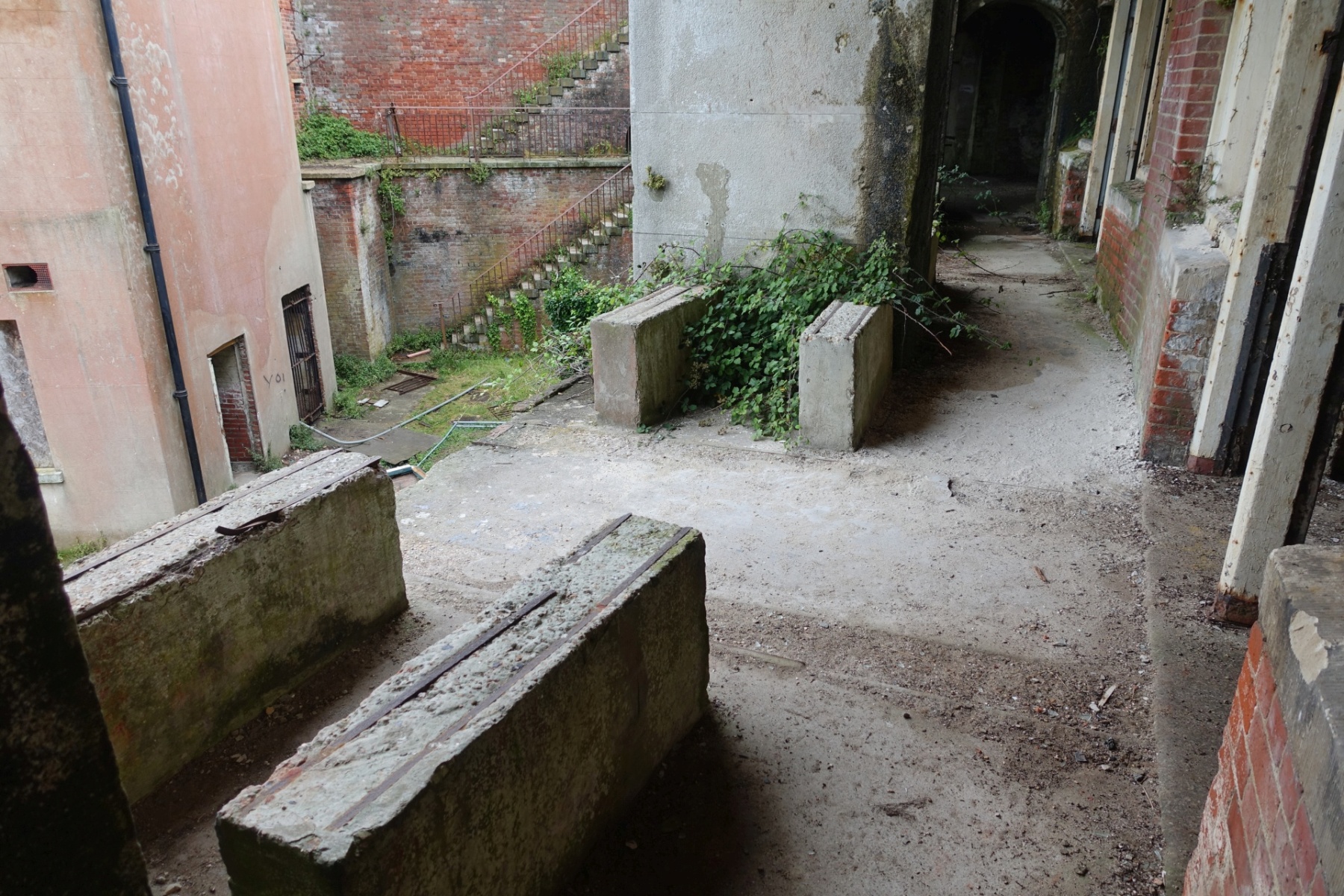 The generators sat on concrete pads cast on the floor of the casemates, which are still visible today, as are the concrete plinths outside the casemates on the verandah, on which the fuel tanks that supplied them sat. In the 1970s rows of armoured cables were still in place on the ceiling, running out of one of the gun ports, into the earth bank. All that is left now are the fixing points for them. 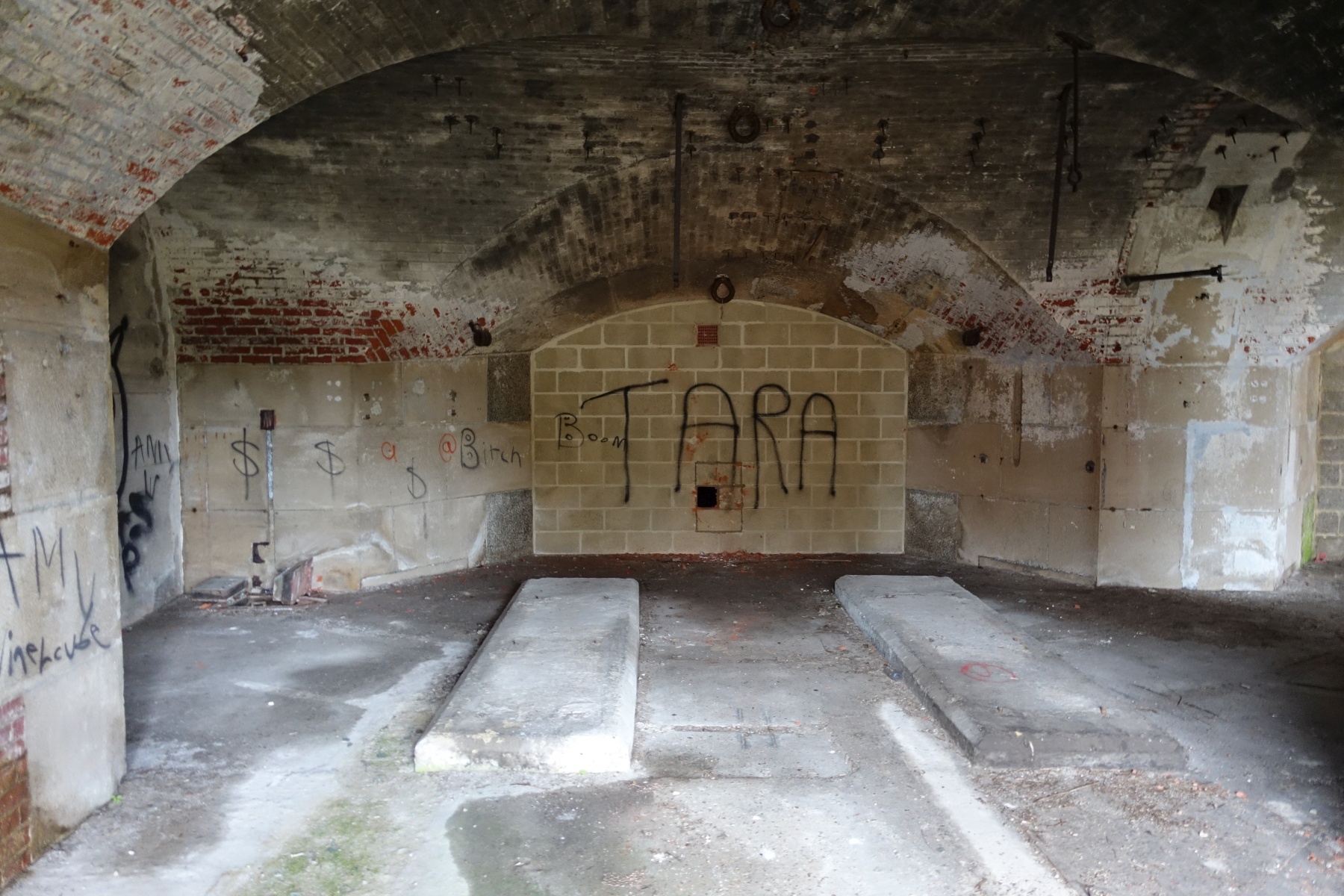 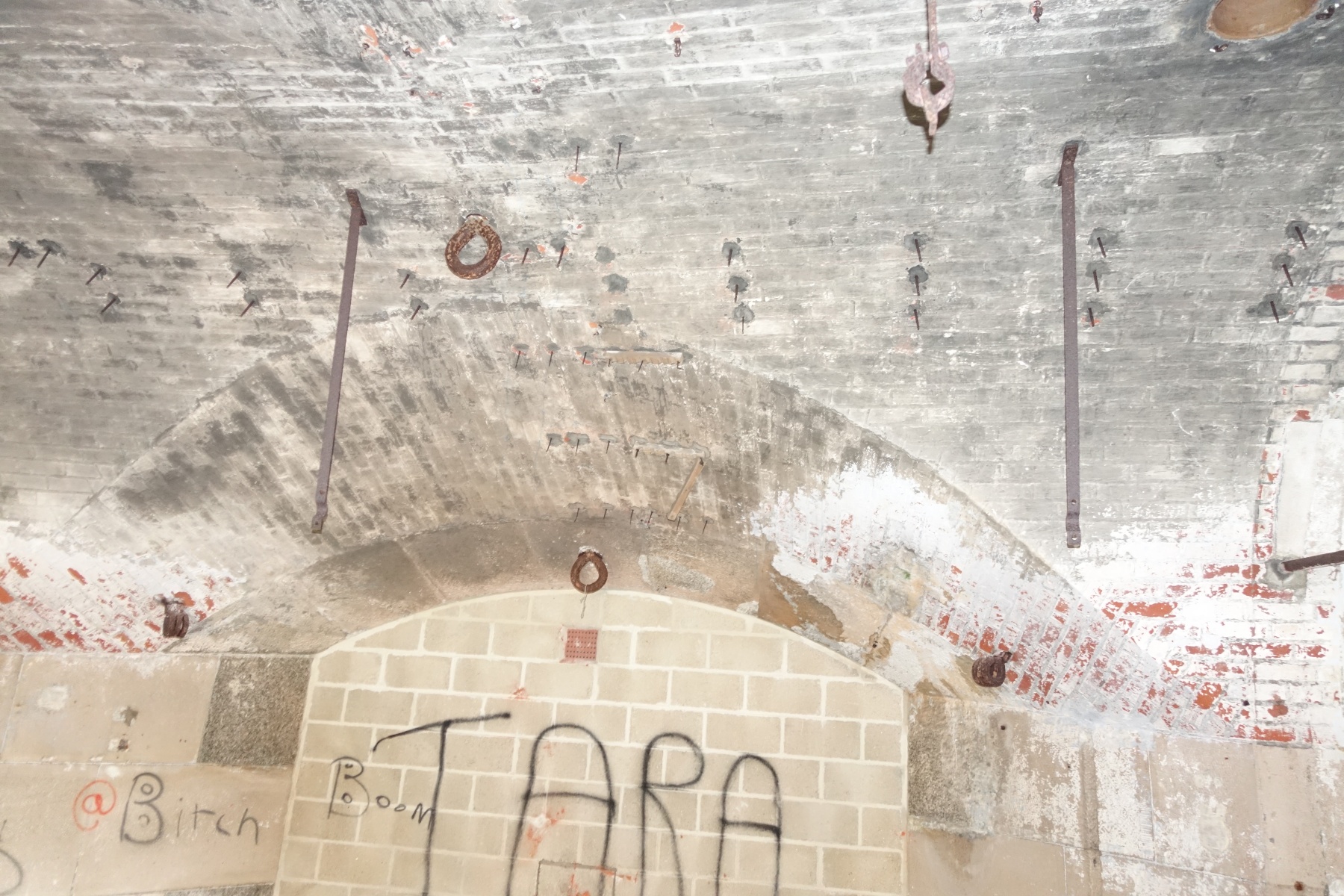 They are not shown on any of the plans of the fort and although coast defence batteries such as the one installed in Fort Gilkicker in 1898 were usually fitted with coast defence searchlights, there is no record of them. Gilkicker was adapted to mount two 9.2inch Breech Loading Guns and two 6-inch Breech Loading Guns. They were added when the old Victorian fort was declared obsolete and its complement of Rifled Muzzle Loading guns were removed. To protect the new guns and their ammunition magazines beneath in the old casemates, the fort was covered with the earth bank that is still there today. 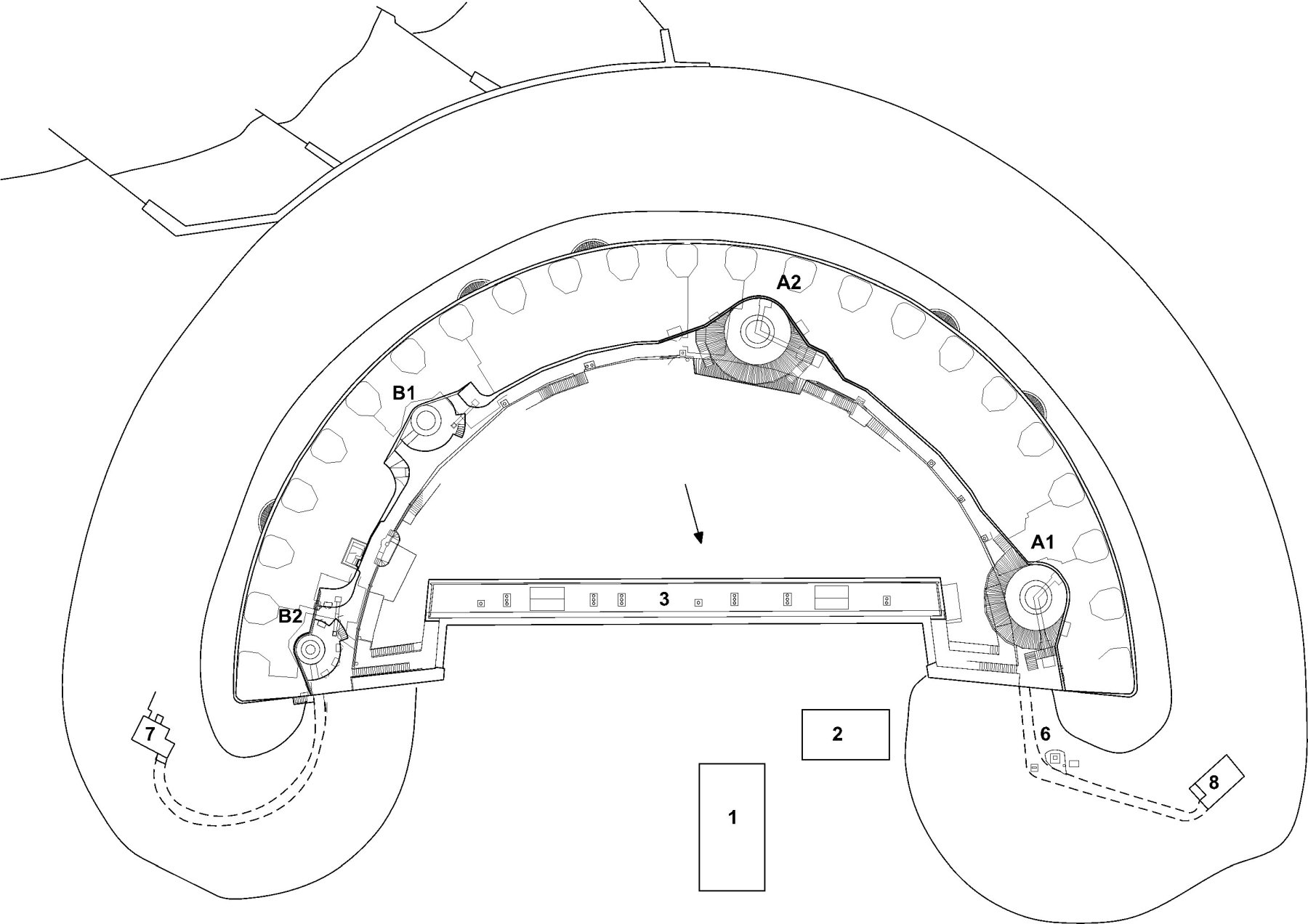 The searchlights are marked, or at least the bases for them are, on some OS maps of the area. On this map three are marked as ‘S.L. Sta’ (Searchlight Station). One to the west is just marked as a ‘Concrete Base’. 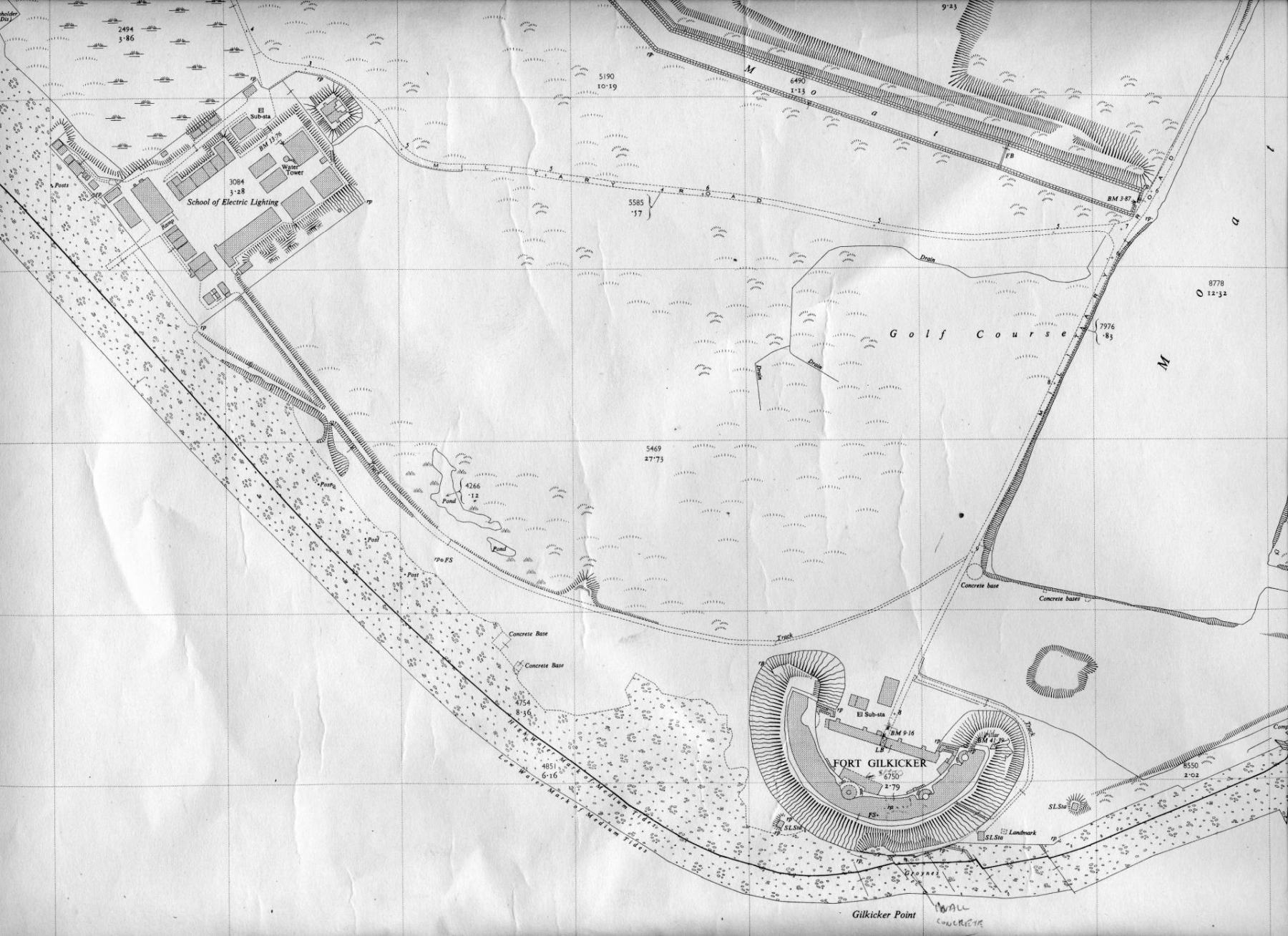 Were they fitted when the Breech Loading guns were installed? The guns were removed in 1905-6. Why did the searchlights remain when the guns were taken away? Or were they added later?.
It is possible that they were fitted for training purposes to be used by the nearby Royal Engineers’ School of Electric Lighting further to the west from 1907 until 1960. In the early years it provided training on searchlights. 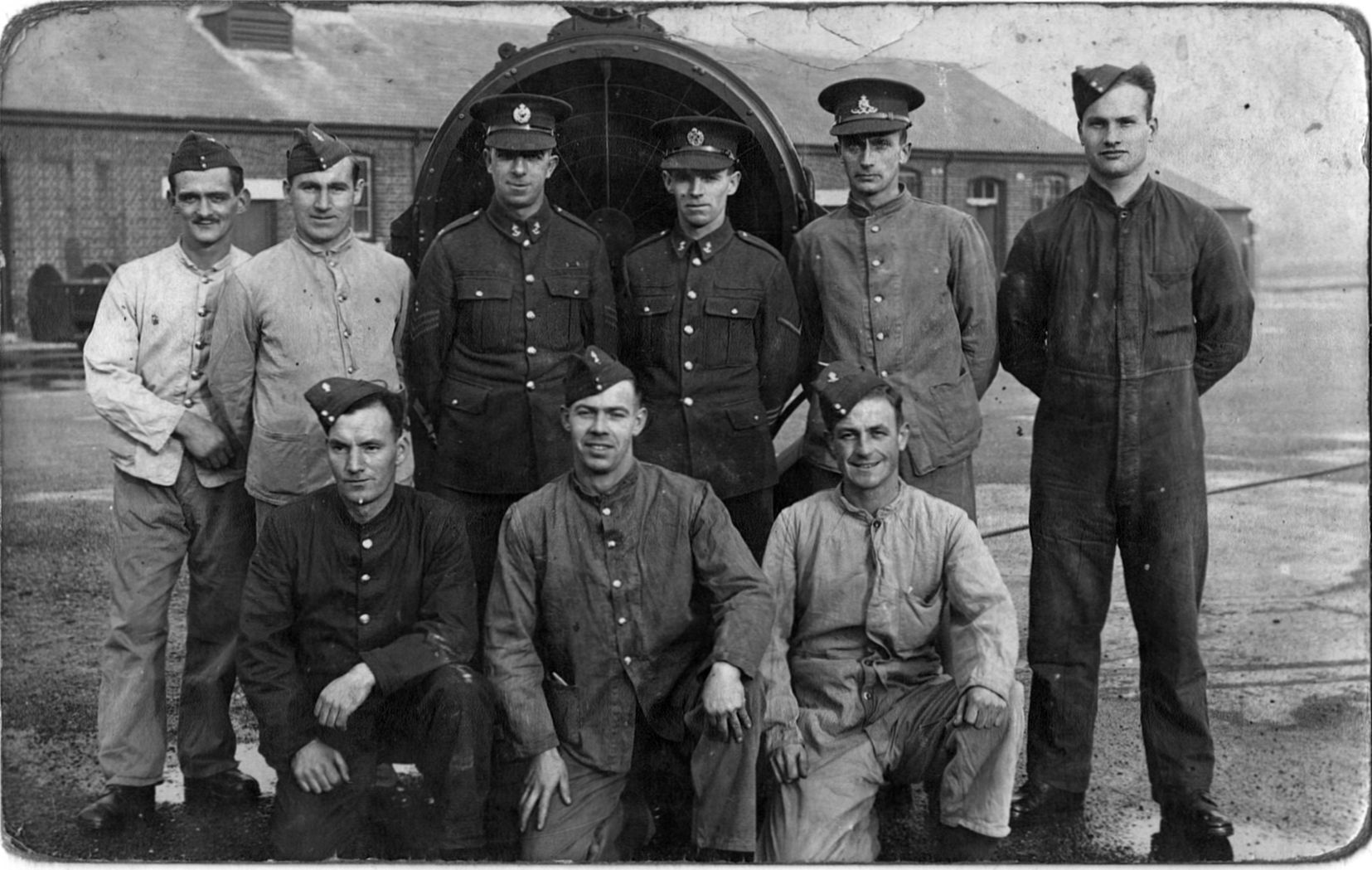 One startling piece of evidence for the searchlights surviving up to World War Two comes from a German reconnaissance report of 1939.

The following text is taken from the M.Dv. 502,4: “Foreign Marines England Volume A – Naval bases and coastal fortifications – Portsmouth with Southampton and the Isle of Wight”
High Command of the Navy;

Department of Naval Warfare 1939.
Translated into English, it states that:
This is a draft of the military and military facilities on the British home coast.
The entry for Fort Monckton and Fort Gilkicker shown in the reconnaissance photo says:

Fort Monckton
Location: 2 km southwest of Fort Blockhouse. Construction: Old casemate, similar to Fort Blockhouse. Armament: Apparently no armament at the moment. The fort and its surroundings serve as a practice area for a school of electric lighting, as known from a press release. The space between the fort and the Haslar Hospital is occupied by barracks.

Gilkicker Pt battery.
Location: southern tip of the Gosport peninsula.
Construction: semicircular earthwork with trench, which is accessible from land by a bridge.
In front of the wall there are two (Scheinwerferstände.) searchlights on the bank.
Armament: 2 – 15.2 cm guns were claimed; not sure if it currently exists.
To the west, the so-called. Stokes Bay line of defense, originally built to protect against landings.
It is a trench with a wall about 5 m high, which is no longer of military importance.
The site is currently used for experimental purposes (Royal Navy Experimental Camp Stokes Bay) about which no details are known. A barracks complex is located 200 meters southeast of Stokes Bay Pier.

All that remains of the searchlights today are the concrete pads. Another enigmatic echo from Stokes Bay’s military past.